Alfton Denise Jackson, a single mother of two young boys, was in tears when the news came through that she had qualified for a new home. “I received a letter from my case worker,” reported Ms. Jackson, “stating it was a program to build your own home and if I was interested in the program, to come to the site.” 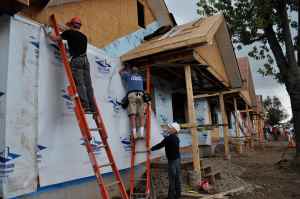 The “site” is one of the largest Habitat for Humanity projects in Habitat St. Louis’ history, encompassing twenty-four new homes for this year, adding up to ninety-one total for the Jeff-Vander-Lou neighborhood alone.

The Jeff-Vander-Lou district of Mid Town St. Louis is historic – first and foremost due to the fact it was the first place in St. Louis where African Americans were allowed to own property. Explains Habitat for Humanity St. Louis Director of Resources, Courtney Simms, “A lot of African American businesses were down in the corridor … a couple of blocks over, so to be able to come into this neighborhood and build homes… is quite significant.” 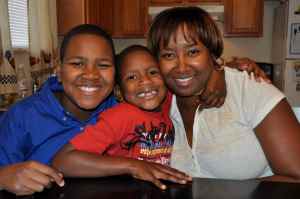 Alexander, age 12, and Ledra, age 7, the two young sons of home-builder Alfton Denise Jackson, are excited about the family’s new prospects. Their reasons are first for safety, and second because they will now each have their own bedrooms. “We used to live next to a man who would beat on his wife,” explained Alexander. “But now we’re moving to a safer place.”

When asked if the present neighborhood where Ms. Jackson, Alexander, and Ledra now reside is safe, Alfton was quick to reply, “No … We [currently] stay in some nice apartments in an area [St. Louis] is trying to build up around here but we’re right next to some of the projects … it’s somewhat scary but [although] we [have] learned to cope with it … it’s not a place I would want to raise my kids because it’s kind of dangerous.” 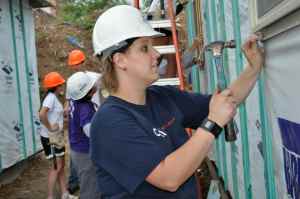 Asked if he was at times scared of his present location in life, Alexander reported, “Yes. There was a shooting,” going on to explain there are gunshots nearby that ring out at night.

The Jackson family are gregarious and affable. They smile frequently, and it’s not only for the camera. There is a love and a bond that one can readily detect. Alfton is quick to tell me of her sons’ recent school honors, of “all E’s” and awards, and of a hushed thankfulness that her sons are so fond of their school – a school they will not have to change when they move into their new home in Jeff-Vander-Lou come late November. Catch phrases like “peaceful” and “pride” and even “college” are part of her young boys’ vocabulary. As is an excitement for a future they are proud to step into.

Looking around the Jeff-Vander-Lou neighborhood, it is exciting to see a community quite literally on the rise, rolling up their shirtsleeves in an effort to reclaim a past pride, a past history that folks around here point to with symbolic reverence. There are the odd dilapidated structures of days gone by, before the factory jobs moved out of town. There are a large number of vacant lots, and amidst the vacancies there is a whole new community that is quickly taking shape, rising up from the dust.

Driving up and down the streets, Courtney Simms smiles broadly as she explains which new homes were built in which year, which vacant lots are owned by Habitat, as well as an impressively large row of homes, set out on multiple city streets, which are currently under construction. She takes a genuine pride in her work, showing and explaining the LEED Certified achievements of the new Habitat homes, of where a holistic approach to plotting and planning is merging cost saving features with the natural environment. “When you consider that … where these houses [now sit] were vacant lots and now they’re thriving families that will be raising their children … [we are together] rebuilding the community.” 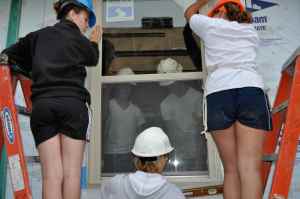 And yet while folks are hopeful, the fact is that the recent history of Jeff-Vander-Lou is not exactly rosy, as seen most readily in the multiple stop signs strapped with stuffed teddy bears, of stuffed dolls of various shapes and sizes, pinpointing the intersections where children from the neighborhood have at some point in time lost their lives.

Which is where the desire for hope and for change have caught fire, where the sense of community, at least locally, is making a sincere power play. Where “ninety-one thriving families” are most certainly coming together, hammers in hand via Habitat for Humanity, made up of volunteers from CEO’s to Senior Vice Presidents to the average, typical “Joe” – together here unified, quite busily making a stand. 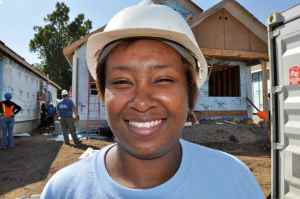 2006 Habitat homebuyer Wendy McPherson, who is now volunteering as a “mentor” to Alfton Denise Jackson, amongst others, explained the phenomenon of what is happening here best by bringing the word ‘community’ down to its brass tax. Explains Wendy, “It says a lot about ‘community’ because it teaches your neighbors to come together as one and not just be next door – but to get involved … It helps others to become more aware of their surroundings and to draw together as a community and work together. It makes a difference when you know your neighbors and you look out for your neighbors and everyone comes together.”

One thought on “Moving positive with Habitat St. Louis”