The Zion Cemetery of Memphis, TN has been in a state of disrepair for many decades – the grave markers in most cases inaccessible thru a canopy of creepers. 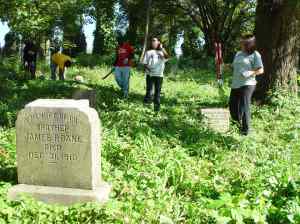 The cemetery is important because it was the first African-American graveyard of the region, founded in the 1870’s by the “Sons of Zion”, who were former slaves. The property was in use until the 1970’s but quickly slid into disrepair shortly thereafter. In the 1980’s and 1990’s there were rumors of the gravestones being used as “chop shop” jack props for car thieves and as a result – this was a location that the general public would dare not venture.

Local activist Ken Hall of Volunteer Mid-South has been working with local volunteers to correct that for the past nine years.Currently, approximately eighty percent of the property is still covered by overgrown brush, weeds, and thorn bushes – but Mr. Hall is optimistic that one day this will change.

In the accompanying photographs, he supervises the work of 100 local teens from the non-profit Bridge Builders comprised of 50% white and 50% African-

American youth. Armed with machetes, mowers, and clippers, they go in search of the gravestones of the Sons of Zion by re-claiming the land for the future generations of those buried here.

4 thoughts on “Reclaiming the Sons of Zion graveyard”