A number of habitat islands are taking shape in the Upper Mississippi River just below Brownsville, Minnesota near the Minnesota-Iowa boarder – islands in the stream now being reclaimed for wildlife that were once prevalent before the Corps’ locks and dams were introduced back in the 1930s. The project is an effort by the U.S. Army Corps of Engineers, in conjunction with Fish and Wildlife, and Minnesota and Wisconsin Department of Natural Resources to “restore lost and diminished fish and wildlife habitat in the pool by restoring islands.”

According to Jesse Weymiller, a local tow-boat sub-contractor tasked with moving rock via barge to help construct the approximate 22 islands in the project, the work is moving along well – now in phase three of three phases. 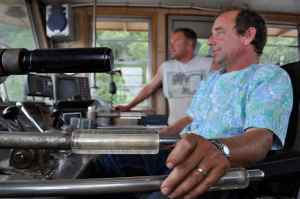 Jesse represents three generations of river-men who presently man their set of two tow boats and multiple barges – a local family run business who represent over 100 years of experience working the river between them.

“I started working when I was 15 – first working summers,” explained Jesse, now age 29. “I guess my future was pretty well set out before me.”

Jesse’s uncle, Tim Weymiller, who has worked dredging, towing, and construction on the river with his father from the age of 12 likes the idea of local workers included in the project. According to Tim, most jobs go to out of state contractors and sub-contractors, up from Mississippi and Louisiana, with locals making up about 20% of the current workforce. “But that’s really okay – because we also travel. We go where the work is. It just so happens we’re now working local.” 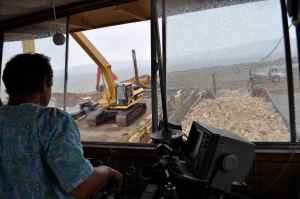 The islands are comprised of a layer of sand which is dredged from up stream in the river, a layer of rock, followed by the planting of native grasses and rows of willow trees to help buffer the island while attracting a number of waterfowl, turtles and fish.

I spoke with local resident and fisherman Jody Sonsalla who talked about the cost involved – stating it was a very good thing. “A number of years ago, the Mayor of Brownsville – Tim Sears – stood up and told the different people at the [town] meeting – ‘You know, $100,000 worth of rock in 1980 would have saved us $15m today’ – and it’s true – and you know, it’s one of those things that if we wait till tomorrow its just going to cost us more.”

While I canoed through the three-mile construction zone taking shape in the middle of the river, it was pleasing to see a return of the waterfowl that were once so prevalent in these parts. I noticed bald eagles, pelican, seagulls, as well as a great egret who stood watching the cranes, tugs, tow boats, and barges, busily re-creating a once-lost habitat.

3 thoughts on “Islands in the stream”