When Ruqiya Warsame and Muhuba Ade talk journalism here at
Minnesota International Middle School they do so with a glint of passion in
their eyes. The duo of friends, both age 13, who were a part of a seven-student summer school journalism program, come from a world swirling with political and humanitarian refugees, of continual negative press, as well as a legacy of civil war which has been raging their entire lives.

“When I started researching things,” explained Muhuba, “I felt something that I’ve never felt before – I knew people were struggling … [and] it made me research more to know more.” 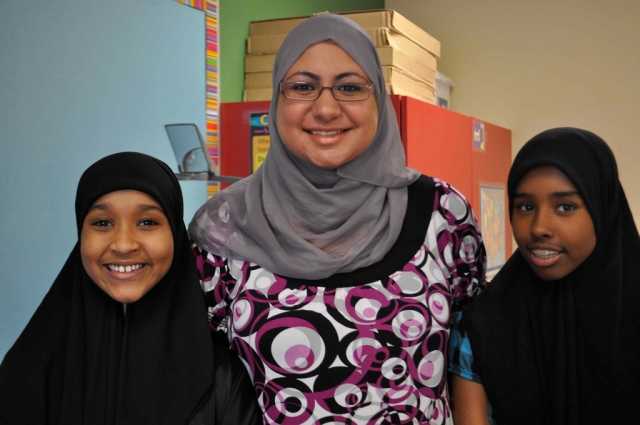 In 1991, twenty-one year old photographer Dan Eldon set out to chronicle the famine raging in the girls’ home country of Somalia – a famine brought on by a devastating civil war begun the previous year – a famine that the world did not at that time know about.

“[Dan] had a beer with Aidan,” a Reuters photojournalist in the region, explained author Jennifer New who wrote the biography on Dan titled The Art of Life. “Aidan told him a little of what was happening in Somalia and invited him to come along on his next trip north.”

“They heard rumors of a famine creeping across southern Somalia, [and] they wanted to visit the region themselves and see if there was any truth to the stories,” explained Kathy Eldon, Dan’s mother. “[He] was in Kenya for the summer, before returning to UCLA that autumn to continue his studies, [and] was utterly stunned by what he saw – hundreds of dead and dying women, children, and old people; thousands displaced in a desperate search for food.  Although barely able to view the horrors unfolding before him, he shot them with his camera and they were among the first to be seen by a global audience. Moved by the response to his images, Dan returned again and again to Somalia, recording the aid that flowed into the country- and its decline into chaos. He never returned to UCLA.”

Photojournalists like Dan Eldon and others like him who gave up their lives to tell the story are important not only because they led directly to relief at the time, but also due to the fact that they stand as an important inspiration for aspiring young journalists like Ruqiya and Muhuba – a new generation who only know about the past through their parents and the documented news articles that have stood the test of time.

“I learned that when you’re a journalist, you get to save people’s lives,” explained Ruqiya. “Not physically, but emotionally – because there’s people
in the shadows that people don’t know about … and [it’s important] to help them.”

The lives of Somalia’s refugees are by and large lives lived in the shadows – the diaspora of a people who cannot at this time return to their native land due to civil war. Somali-born photographer Abdi Roble is likewise an inspiration to the girls due to his documentation of the Somali diaspora and active humanitarian work – a work which has taken the girls’ school administrator, Abdirashid Warsame, a friend of Mr. Roble, back to Africa in a combined effort to see how they could help.

Ruqiya and Muhuba represent the next generation of American-educated Somali-American journalists. Although still young, they’ve already interviewed the President of Puntuland, Somalia, who paid their class a visit this past summer. “We weren’t even expecting him,” said Muhuba. “It was a surprise for us.”

President Abdirahman Mohamed Mohamud‘s question to the girls and their class was if they had plans to come back to Somalia. The girls told me that they smiled broadly when asked this question, answering together, in unison: “Yes, we do want to go back to Somalia … We want to make a difference.”

Photographs by Dan Eldon used with permission by the Eldon family.  Copyright Reuters/AP.  All Rights Reserved.