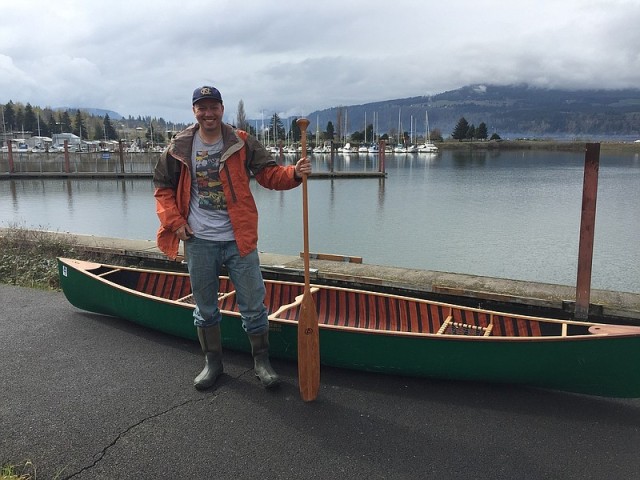 JOURNALIST Neal Moore at the Hood River marina with his Navarra canoe, shortly after his arrival in Hood River. Moore hit the Columbia River again April 9 and two days later it cracked during portage around The Dalles Dam. Moore found a new, stronger (and lighter by six pounds) canoe through a private seller in White Salmon and expected to continue his journey by Thursday.

Chance encounters can sometimes be life changing in grandiose or miniscule ways. You may not realize at the moment of the encounter, but years later, you may look back and say, “Hey, if I hadn’t responded to Kirby’s call and connected with Neal Moore, we may have missed the opportunity of having our youth featured in a story in the New Yorker, a documentary on CNN or a book detailing a canoe voyage across America.” The journey of 7,500 miles from sea to shining sea is described as a “voyage of discovery into the depths of America’s soul.” Moore’s desire is to tell the stories of the diverse communities he encounters along the way in an effort to “understand and celebrate individuals, families and communities rising above themselves.” What was to be a brief stop in Hood River turned into a week of discovery for Moore and the community.

I have always believed that building relationships is key to living life fully. I don’t believe in fate, but I do believe that if you are open to interacting and potentially forming a relationship with those you meet, your life will be enriched. Much can be learned about yourself, about those you meet and the way they perceive the surrounding environment.

Back to Kirby’s phone call. It came at a somewhat inopportune time. I was in the emergency room with my youngest granddaughter waiting for the doctor to come in and do an examination. She had exhibited some painful symptoms that morning at school which suggested appendicitis. Aya is a wisp of a second grader, who seldom complains about physical discomfort. She reminds me of a willow sapling, tall and slender, physically strong, swaying in the breeze, family roots and love grounding her. Seldom do tears well up from monkey bar blisters or brother’s inadvertent kicks or pokes. Insensitive remarks or inequitable treatment are another matter, turning on a fire hose of tears. All turned out well. No appendicitis or nasty flu bug detected. Rest and relaxation were the words from the wise doctor and we followed the orders precisely.

I visited with Kirby briefly, hearing tidbits about a man he hoped I would speak with, a man who had paddled upstream from Astoria on a journey of discovery. These tiny morsels of information intrigued me, and I said “Sure, have him give me a call.”

That afternoon Neal Moore gave me a call and I learned a little bit more of his journey. It would be 7,500 miles across American, from “sea to shining sea.” He would chronicle his journey and document through film, newspaper article and book the stories of small towns and big cities along the way. These were stories of hope and inspiration that underscored the spirit of our country and its remarkable diversity. I was all in at this point, and agreed to meet at the library the next morning, spending a day introducing him to the people and places that would showcase our community.

As I pulled up in front of the library, I could see a soggy young man standing on the steps in the pouring rain. My bad. The library didn’t open for another hour. We sought refuge in my home in Odell. Over several cups of coffee and a plate of chocolate chip cookies, we began a lengthy conversation about Hood River and the people who make this such a beautiful place to live.

Neal said he had enough stories to research that would take him through the weekend, but he hoped I could connect him with a place to stay and store his life possessions now packed in his canoe on the marina. I first offered my home, but thought better of it when I realized that the people he would need to talk to lived down the valley and transportation by canoe is limited in that respect. We pondered this transportation dilemma and agreed to meet later in the day after I went to my blood donation appointment. I was optimistic that I could find someone willing to house him for the next few days.

As I waited in line for my Rapid Pass review at the Red Cross station, I began texting folks living in town, and who are connected to activism, the theme Moore chose to highlight. Let me tell you, a lot of networking gets done at a blood drive. Like-minded people seem to extend their hands and hearts as well as their arms to give life to others. After a few “out of town” replies to my texts, who before my astonished eyes would appear, but an angel in fashionista clothing, Barbara Young. We chat. “Sounds interesting,” she says. “We have an RV in the driveway he could use. It would be better than the pouring rain camping on the rivers edge.” Relief. A warm place to stay and one of the connecting hubs of activism in our community. After a brief call to her husband Gary, Barb learns that they have plans the next three days.

I move behind the “veil of secrecy,” a curtain used by the Red Cross staff to review my health history. Suddenly I hear Barb’s sweet voice calling. “Hey Maija. I am waiting here with Paul Blackburn and he says he has a room.”

I am ushered to my donor bed and the needle is inserted, blood filling the bag rapidly. At the precise moment I finish, Paul plunks down on an adjacent gurney. I fill him in on a few details and the connections begin to fall into place. The Blackburn/Dillon household is full of activism and connections for our intrepid paddler.

The following days are a whirlwind of conversations with Gorge Ecumenical Ministries, Latinos in Accion, The Next Door, Somos Uno … From there, he is on to the individual activists’ stories, Vicky, Gracy, Adriana, Montserrat, and Cristina. Moore has to extend his time in Hood River another three days to make all these connections. He has just scratched the surface.

Moore’s story begins in a community where helping hands, hearts and arms are extended willingly and compassionately. It is the story of many generations who have met discrimination and adversity head on, inspiring a new generation of movers and shakers.

My story is the story behind the story; of the list of friends and acquaintances who began making the connections for Moore to meet our youth, our dreamers, our student activists. These students passionately believe that all lives matter, that our schools should be safe, that people of every age, gender, ethnicity, and faith should be respected. Their belief has been transformed into action, raising their voices, mobilizing their peers, proposing solutions to the problems plaguing our society.

I like the story behind the story that Neal Moore will tell. It is the story of our community at its finest moment, day in and day out.