As we reported last week, Neal Moore is now over halfway through his 12,000km odyssey across the United States. He plans to paddle 22 rivers, portaging his fully laden canoe on a cart where necessary, and finishing in New York with a celebratory spin round the Statue of Liberty. ExWeb spoke to Moore about his journey.

Back in 2018, you made about 3,000km before stopping. Did you repeat the same route on this expedition? How did it differ this time around?

Two years ago, in 2018, I paddled and portaged against a rip-roaring flood on the Columbia and Spokane Rivers. The dozen-plus dams, including the Grand Coulee, were nearly fully spilling. This required a 16 to 32km portage around each one -– harness strapped to my limbs, wheels tied under the canoe and all my gear inside, pulling my craft like a mule on the side of the road. Soon after, I tipped in the St. Regis River in western Montana. After I got my canoe and some gear back, I missed out on paddling up the Clark Fork because of a 100-year flood. I eventually hung up my paddles in Watford City, N.D.

This year, I launched at Astoria, Oregon three weeks earlier, on Feb. 9, 2020.  I was determined to paddle up the Columbia farther than last time, to just above the Canadian border, where I could catch the mouth of the Pend Oreille River and paddle to Lake Pend Oreille. Here, I’d follow the Clark Fork to Garrison, Montana, sticking to a waterway all the way to the Continental Divide.

But COVID-19 hit weeks into my expedition. Although I cleared the state of Oregon the day before it officially shut down, by the time I got to eastern Washington on March 23, the Washington governor issued a statewide stay-at-home order and the U.S.-Canada border closed down. So instead of progressing further into Washington along the Columbia as intended, I went the Snake River [a federal waterway].

I was in Lewiston, Idaho nine days later. From here, I hiked 160km north along the Idaho border, paddled 100km across Lake Coeur d’Alene and portaged an additional 65km north to Lake Pend Oreille. I made my way to Garrison, Montana, where I repeated my portage up and over McDonald Pass and down the Missouri to the Mississippi, where I find myself now.

Which parts have been the most challenging?

The Columbia River Bar at the mouth of the Columbia River is known as the graveyard of the Pacific, the most dangerous stretch of water in the world. You have to come prepared with the right gear, a clear forecast and a lot of luck. Paddling the mouth of this river is an adrenalin rush, but once you make it around Tongue Point and into the “old-man sloughs,” you’re relatively okay.

There’s a stretch of the Columbia River Gorge just above Bonneville Dam that’s problematic when a strong wind gets behind you. New Englanders Pete Macridis, 25, and Timothy Black, 23, vanished on this stretch of river in 1978. Two years ago, I had a rough time here, but conditions got even worse for me farther upriver.

It’d taken a full day to portage the dam, and the next morning, winds were forecast for 17mph. I made a mental note to not paddle that day, but when the day looked pleasant, I made a too-rash decision and launched out. Following the Columbia River up along the jagged shore on the Washington side, I had a refreshing, gentle push of wind behind me at first, but this was soon followed by a gale. The waves pushing upriver chop into you unlike any other place I have paddled, propelling the craft quickly forward as you watch for obstacles –- boulders, submerged trees, anything that can capsize you. I managed to get into a cove an hour later, sitting on the slippery, jagged boulders as I held onto the canoe. The canoe was smashing up and down onto the rocks with each progressively larger wave, and if I didn’t get it out, it would be destroyed.

When the wind and the waves picked up even more, I called for assistance in case it got even worse, which it did. The waves soon swamped the canoe, and I lost some gear. The Corp of Engineers sent out a couple of young rangers. The fresh-faced kid, who looked like a teenager, was giving orders to the other kid with a beard. They loaded up my canoe, my gear and myself onto their craft, and halfway across the river, both of their boat’s motors gave out. All other boats had got off the river by this stage, and as the waves propelled us upriver, I thought to myself, Who rescues the rescuers? And if anything happens to these kids, it’ll be my fault.

It was tense, and one ranger was asking the other if we were going to smash on the rocks. A dozen minutes later, the engines started back up and we made it out safely.

Any other major difficulties or close calls?

What stood out this time was both the ruggedness and remoteness of the Snake River. In the nine days I paddled her, I didn’t see any other boats, and not one fisherman. I experienced sleet, snow, a torrent of rain, and wind pushing me forward, backward and side to side.

The tricky part of all this remoteness is that if you tip into the cold water, it’s on you to save yourself. I had a wetsuit, a fire starter kit and a cell phone in a waterproof case (although no reception) on my person at all times. Once I thought I’d have to jump for it, because the wind and rollicking waves pushed me hard against a riverbank filled with obstacles. I pulled alongside a log and was bailing hard, because the waves kept breaking into my open canoe, but this log soon disappeared, and then I was grasping onto willows.

A half hour later, when I felt I couldn’t hold on any longer and was ready to jump in and swim for shore, the wind changed on a dime, and it blew the canoe back out into the river.

Another close call came as I paddled six days up the Mississippi from its confluence with the Missouri, just above St. Louis. I would have liked to have made camp on the bigger islands here, but they were inhabited by people who did not want visitors. I was told later that they make meth along here and to stay away from these folks.

On my fourth night on the Mississippi, I was straddling one of these islands as the sun was setting. I was determined to get past these people and set myself up on a sandbar just under the dam at Clarksville, Missouri.

But it was nearly dark as I approached, and I realized that there were a whole lot of pelicans on the spot I’d wanted to call home for the night — over 1,000 of them and more incoming. They were nervous, so I gave them space, but then the wind picked up directly against me. The rain fell sideways and I was pushed out into the channel. I was fighting like hell for at least a half an hour to make the shore.

But as I struggled to get around the pelicans, a spotlight beamed directly through me and the pelicans. And they flew, all in one motion, up they went. A thousand-plus pairs of wings in one frantic motion, all lit up by the spotlight. The beam came from a tow pushing a load of dark barges. It had snuck up on me, and I was far too close to the flashing red light on the lead barge. I paddled for all I was worth to get out of the way, thankfully making another sandbar in time.

You have said you hoped to be able to talk to people and tell their stories. How has COVID changed this mission?

Talking to folks in a story-minded setting has been extensively curtailed this year. Instead, I’m mainly documenting the people I meet by chance along the way. I’m listening, learning, absorbing the ties that bind –- the threads that make us Americans. I’m looking to underscore our common humanity, but especially bringing into focus the immigrant narrative, the Black experience, along with what we can learn from Indigenous American wisdom.

What challenges do your big portage sections present?

Hiking the Continental Divide was a challenge this second time, as I hit a late-May snow blast. It’d been forecast as rain the day before, but it snowed all day, for the hardest part of that climb. But I had the right gear, and when I got to the top of the pass at 6,312 feet, I was the only camper. There was a foot of snow and soon I had my tent set up. I was out of my wet clothes and into the warm. 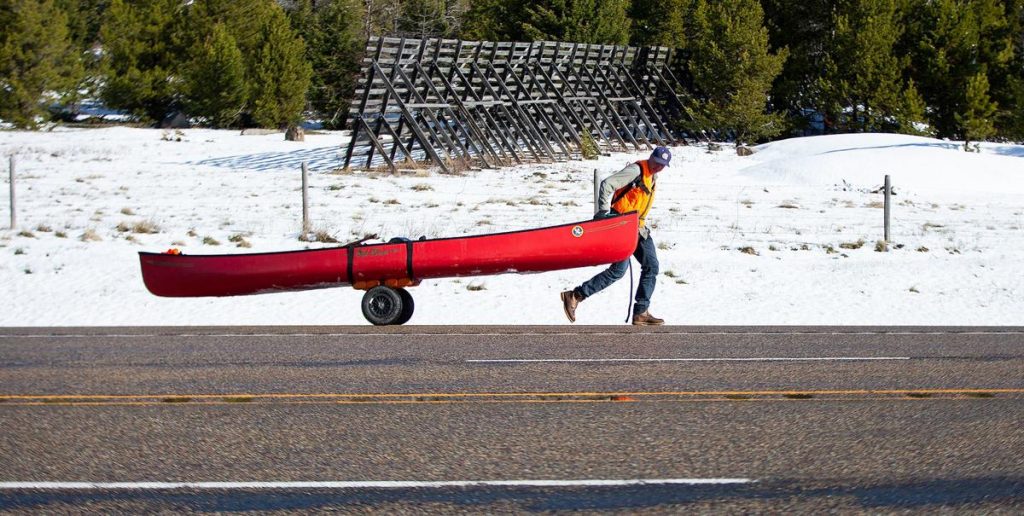 Moore portages down after a snowfall. Photo: Gary Marshall, BMGphotos.com

The following day was brilliant sun with no wind, and it was an easy portage down to Helena. The local paper’s photographer came to snap some shots of me portaging my belongings down the mountain. The moment he got his shots and headed back to town, a grizzly showed up. He came over the divider, his back hump prevalent, and ambled across the road 50 feet in front of me. I was harnessed from behind, attached to the canoe and wheels and gear, and by the time I got my gloves off to try to snap a picture, he was out of sight.

Where are you now and what are your plans for the second half of the journey to New York?

I’m in Memphis and will be back on the water in a few days. I’ll continue down the Mississippi to New Orleans, which I hope to reach in mid- to late-December. From there, I’ll skirt the Gulf Coast and along the Intracoastal Waterway, then up the Mobile, Tombigbee and Tennessee rivers, down the New River, the Cumberland, the Dix and the Kentucky rivers. Up the Ohio, up and down the Kanawha, and up the Allegheny River. From Lake Chautauqua, it’ll be uphill and downhill for days over Portage Road to Lake Erie. Then it’s the Erie Canal, the Mohawk, and down the Hudson by December 2021 to see what has always made America great!